The Derbyshire men's (over 55s) and Ladies' (over 50s) Senior Championships are being held at Ormonde Fields Golf Club on Monday 12 July. They are open to members of all Derbyshire golf clubs. Members can enter on line via the Derbyshire County Golf website or via the a ladies or gents club entry form displayed on the club notice boards

Closing date for entries is 30 June.

There are details of Men's Ladies' and Juniors'  county competitions on the Derbyshire County Golf website. including the Men's 4BBB Bretby Cup on 18 July and Men's  Open Championship on 8 August The Orr Cup and three Junior events in July

On Wednesday 2 June, the club successfully hosted the Midland Boys' Golf Championships. The individual event was played over 18 holes in the morning and the county team event was decided by the aggregate total over 36 holes, 5 scores out of 6 counting for each county.

The course held its own and proved to be a true test for all the players, with a strong breeze later in the day adding  to the challenge.  Only three individual scores came in at par or under. The winner Seb Cave of Olton Golf Club near Solihull in Warwickshire came in at -1 in the morning to win the individual trophy. He also played to par in the second round to win the overall 36 hole gross prize.

There were ten counties taking part in the team event with a total of 60 young golfers representing their counties. The team event was closely fought and was eventually won by Leicestershire and Rutland, with Warwickshire finishing as runners - up.

Once the results were calculated, there was a presentation outside the clubhouse at which the club was complimented by the Midlands Golf Union President David Price. He commented on on the great condition of the course, which the  Leicestershire & Rutland team manager later described as 'a gem'. He also paid tribute to all the people at the club who had been involved in organising the event and had helped on the day. The welcome, hospitality and catering had all been much appreciated.

The Midland's President also presented Club Captain Dr Ian McDarmaid with a Midland Golf Union Shield as a momento of the day. 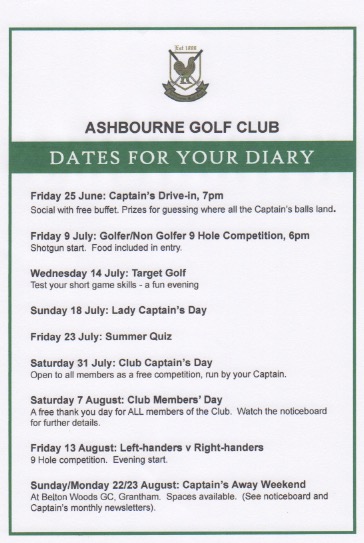